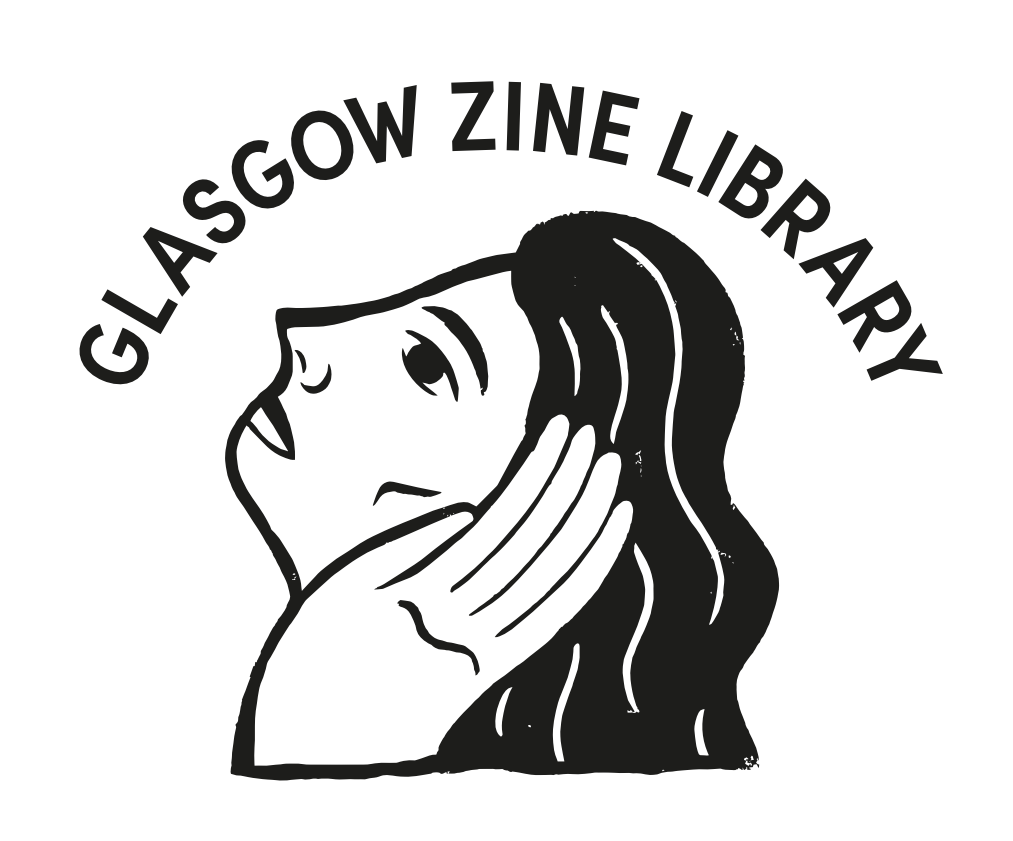 Glasgow Zine Library is immediate and unassuming. It sits just off a junction in Govanhill in a quiet area populated by tenements in various hues of brown, South Asian bridal boutiques, off-licences, halal meat shops, Pakistani sweet shops and continental grocers. For lovers of collection and archive as broader categories, both the library and its surroundings are examples of how places can embody these concepts, as locations where people, objects and texts sit side by side, converse and collide. The library space itself is small, a single room painted dark green, contrasted with the possibilities implied by the shelves of slender zines, and the large table and seating area by the window. When I visited to look around and interview Martha, the Programme Coordinator, we sat and spoke in two mossy green armchairs at the back of the room.

In the foreword to ‘Girl Zines: Making Media, Doing Feminism’, Andi Ziesler writes that (feminist) zines are part of an ‘ongoing conversation.’ From visiting Glasgow Zine Library, it became apparent to me that this conversation takes many forms, and more closely resembles a network than a dyadic interaction. Hands cutting paper to make badges at a workshop, zines overlapping and nestling, glancing over to see what someone else is reading, being drawn repeatedly to a shop sign, lyric, or patch of pavement and wanting to lift, handle, stick and print those things onto paper to share with others– these are all ways in which we can speak to, and through, one another.

The physical library space functions as a reference library, an events space and, more broadly, as Martha put it, a space to embody ‘zine culture.’ Zine culture is inherently collaborative and thus radical, taking the form of a network in which information and enthusiasm can be transmitted and circulated, providing important channels for ensuring survival, resistance, and the finding of ‘validation and reassurance’, as Ziesler put it. This occurs in myriad ways: Martha recounted stories of groups of friends forming spontaneous reading groups to discuss the zines they were reading, people emailing to share interests such as the genre of RPG zines, and the library’s zine making workshops with community groups such as YCSA (Youth Community Support Agency) and incarcerated people in Barlinnie Prison. The library’s approach to sourcing zines and events programming is similarly one of co-production, with much of the collection being donated, and the focus of  events being to build relationships and provide opportunities and spaces for people to pursue the things they are passionate about. When I asked Martha about her favourite produced event, she spoke about a partnership in 2021 with Glasgow Artists’ Moving Image Studios, in which outdoor screenings of local short films were staged outside Govanhill Picturehouse, with the programming done by young people interested in film programming. One of the films projected featured the Picturehouse itself, in a multi-layering of meaning evoking the cut and pasted paper layers of a zine.

Engaging more deeply with the radical tradition of zine making is one of the areas which Martha mentions as wanting to develop in the library’s practice moving forward. As the political landscape, both globally and within the UK, becomes increasingly antagonistic towards working people, minorities, and those who are disabled and/or neurodivergent, it has become crucial to strengthen networks of connection and reappropriate skills, knowledge and practices which enable people to survive and live with autonomy. Thus, the appetite for independent and self publishing has grown, with the Covid-19 pandemic seeing the library’s collection grow significantly as people sought to connect and share stories as a means of navigating lockdown.

Zines differ from commercial print media in that they do not pander to the whims of the profit incentive, and are often produced, distributed and consumed by one person, or a small group. In this way the binary between producer and audience is reshaped and the hierarchical structure of traditional print media circumvented. The sex worker-led collective SWARM, for example, created ‘BLOCKED: A sex worker’s guide to stalking and harassment’. This resource is available specifically to sex workers, containing information and resources on ‘digital security, setting boundaries with clients, legal definitions of different kinds of stalking/harassment and where you can turn for help.’ A fundamental quality of zines has always been that they function as a medium through which people can take the sharing of information into their own hands. Furthermore, this egalitarian quality means that zines are inherently experimental and innovative, as their creators can translate their experiences onto the page without the filtering and editing of traditional print media. Rosa, the qmunicate Features Editor and a volunteer at the library, recounted to me an encounter on a shift where she spoke to someone who was making a zine about dyslexia, in which misspelt words were kept as such. As she would elaborate later in our conversation, zines can function as memories or scrapbooks, containing the being of those who make them within their pages.

This concept of ‘for, and by’ has a long historical precedent in zine culture with publications such as the post-punk second wave feminist ‘Shocking Pink’, which was published between the early 1980’s and 1990’s, establishing a precedent of young women speaking frankly about the topics of abortion, contraception, masturbation, race and lesbianism. This rebelled against contemporary mainstream magazines such as Jackie, aimed at teenage girls. Another contemporaneous zine with the same mission was ‘Feminaxe’, an anarcho-feminist newspaper from Brixton which addressed ‘international and local political issues, with a strong emphasis on intersectionality.’ In my conversation with Martha, she mentioned the acquisition of such historically significant zines as a new priority for the library.

Indeed, the library is far from static, rippling with the energy of emergent possibilities. Rosa says that in her experience, ‘a lot of people don’t know what zines are.’ In a similar vein, Pagan Kennedy writes, in her 1995 memoir ‘Zine’, of her first experience of zine making as a process: ‘How had I forgotten that this- this absorbed, tongue-between-the-teeth, little girl feeling- was the essence of art?’. Both quotes speak to the possibilities of the zine as a form– in its relative obscurity and naive authenticity, it enables people to seize and shape it in their own image. What surprised me the most about my visit to the library was how much I related to so many of the zines in its collection, with such titles as ‘Coming Out Autistic’ and ‘A Blaze of Candles on my Cake: growing old when you’re bisexual, black and disabled’. All literature functions in some way as a mirror to the reader, but zines, in their fractal intimacy, are like the tiny mirrors you find embroidered into clothes or decorative boxes, reflecting small parts of the reader which would otherwise go unexamined.

View all posts by qmunicate